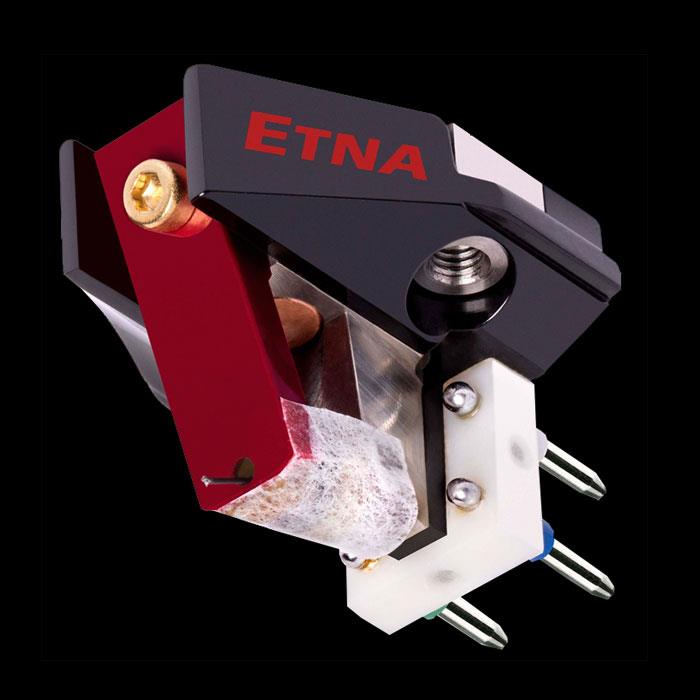 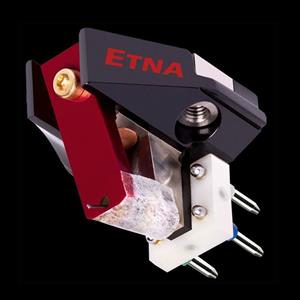 Lyra again turns the analog world on its ear with the introduction of the Etna phono cartridge. Sharing its name with Sicily’s majestic Mount Etna, Etna the cartridge is an impressive monument in its own right, one that melds tried and true Lyra design tenets with designer Jonathan Carr’s very latest thinking on phono cartridges.

Etna was designed with a strong emphasis on engineering efficiency, so that its performance would be as far beyond the sum of its parts as possible. For this reason, although it shares some of its design philosophy with Atlas, the concepts are executed rather differently.

Etna employs a solid titanium core structure machined with non-parallel surfaces to inhibit internal reflections whenever possible, but unlike Atlas (and Titan i before it), this is mated to a slightly undersized, asymmetric, mirror-black anodized duralumin outer body that locks over the core like a very tightly-fitting jigsaw puzzle. The core and body are augmented with bronze and stainless steel resonance control rods, then pressure-fit together into a pre-stressed, solid, void-free structure which is comprised of multiple materials and complex internal shapes. The constrained-layer nature of this construction dramatically reduces the resonant signature of each material and creates a far more neutral-sounding body structure than otherwise possible, while the high body stiffness benefits transients, dynamics and resolution.

Etna uses a yokeless dual magnet system, diamond-coated boron rod cantilever and Lyra-designed variable-radius line-contact stylus. Lyra remains the only cartridge manufacturer to mount the cantilever directly into the cartridge body to create a rigid, seamless connection between the cantilever assembly and tonearm headshell. Why? Linear transducers such as phono cartridges are inherently inefficient devices, on the order of 5 -10%. In other words, of the vibrational energy that enters a cartridge from the LP groove, only 5-10% will be converted into electrical signal. The cartridge’s internal damping system will dissipate some of the remaining 90 to 95%, but much of the excess vibrational energy will reflect inside the cartridge, creating internal echoes and a general diminishing of fidelity. It is quite easy to hear this with many cartridges- play a highly modulated LP with the power amp turned off, and bring your ear close to the cartridge. The “needle talk” that you hear is excess vibrational energy which isn’t being controlled properly. Etna’s direct-mounted cantilever helps conduct this excess vibrational energy into the headshell, where it is safely dissipated within the greater mass of the tonearm and turntable plinth.

Etna utilizes the asymmetric design concept first seen in the flagship Atlas, but moves the screw/screwhole all the way to the front of the cartridge and interposes a bronze damping barrier between it and the mechanical path linking the cantilever assembly to the tonearm headshell. Freed of all obstructions and voids, the rigid, direct path established between cantilever and headshell is highly effective at draining away vibrations once they have been converted into electrical signals, effectively suppressing induced resonances and internal reflections that would otherwise manifest as sonic colorations. A narrowed mounting area couples Etna more tightly to the headshell and facilitates the transfer of vibrational energy into the tonearm, giving even better control over spurious resonances.

Another design strength is Etna’s high-efficiency X-shaped signal coils, another attribute it shares with the flagship Atlas. Compared to traditional square coil formers the X-shape allows each channel to operate with greater independence from one another, giving better tracking, tighter channel matching, improved separation, and lower crosstalk-induced distortion. Although there are and have been other X-coil cartridges, their benefits have been accompanied by poor efficiency (in converting mechanical work into electrical output), either requiring high internal impedance (the larger coils add considerable moving mass and increase noise) and/or having low output voltage (which stresses the phono stage).

To overcome this weakness, Lyra conducted a careful investigation of X-core coils, using a combination of mathematical analysis and hands-on experimentation. The outcome of the analysis program was a very specific X-core shape and dimensions that not only had higher efficiency than any previous X-core cartridge, but also surpassed the efficiency of Lyra’s earlier square-coil cartridge designs.

Rather than using all of the extra efficiency to single-mindedly increase the output voltage, Lyra chose to allocate part of the extra efficiency to increase the output voltage (12% higher than Titan i), and use the remainder to reduce the amount of wire in the coils (22% less than Titan i). The decreased mass further improves tracking performance, while the higher output and lower internal impedance allow phono stages to perform better.

Lyra’s New Angle technology mechanically pre-biases the signal coils so they are perfectly aligned to the front and rear magnets during LP playback, which allows the coils to move optimally in all directions for superior, distortion-free playback.

With the introduction of Etna, the Titan i model is discontinued and now limited to stock on hand. The Lyra line is now comprised of Delos, Kleos, Skala, Etna and Atlas.

While Etna is second from the top in Lyra’s line, one listen will demonstrate that this cartridge’s performance would define the very top of any other cartridge line. Atlas has a very refined, elegant and voluptuous sound while Etna’s personality is more outgoing. We truly believe that choosing between these two exceptional performers will come down to one’s tastes and the system in which it will live. For many customers Etna will be ideal and become their preferred Lyra.